The next morning, after a good breakfast in the hotel dining room, we shuttled back down across the river to start our day’s ride where we had left off in Hancock. The weather continued to hold and the trail was drying out during the rest of the week. It was another 50-mile day before our final two shorter days, and there were a couple of sightseeing side-trips along the way as well.

Nearby, the Big Slackwater section of the trail had long since been wiped out and it was necessary to take a long and boring detour on local roads to get around it. By my 2016 trip, the area had been fixed up with a causeway along the bluffs, allowing us to ride the entire length of the C&O with no detours.

When we were fairly close to our destination for the day, we took another sidetrip to the Antietam National Battlefield outside Sharpsburg, MD. We listened to a ranger’s presentation and rode along some of the battlefield roads, then took the main road into Sharpsburg and from there on down to the river crossing. This was the only busy highway riding of the trip, and skipped a few more miles of the trail (which I ended up riding in 2016).

As usual on these trips early in the season, I was feeling stronger on the fifth day than I had on the first days, but looked forward to completing the final days with some interesting site visits ahead. The main attraction was a visit to Harper’s Ferry, which I had visited by car and enjoyed a lot some years previously. There was also no rush to the day’s activities since the mileage to cover was relatively short.

Harper’s Ferry is not too far down the trail, and when we got there we parked and locked our bike in a provided bike rack and walked across the pedestrian walkway into town. In the winter of 2020 there was a major train derailment on this bridge, dumping some rail cars into the Potomac and tearing the walkway off the bridge, thus cutting the town off from the C&O trail. As of this writing in June 2020, plans for restoring it are still not determined.

Unfortunately, it was just before our rest stop that I realized that my original Garmin Edge 705 had fallen off its mount at some time since we left Harper’s Ferry. The early Garmin mounts could sometimes appear to be clipped in solidly when in fact they weren’t, and when I put the unit back on my bike after crossing back to the canal side, I must have not made the connection. I was really bummed about losing it, plus it of course had all my data and map traces for the trip. This kinda put me off for a couple of days and is probably one reason I didn’t remember the trip as fondly as I should have.

Our lodgings for the night were at the Colonial Inn in downtown Leesburg, VA. Our bikes were loaded up and we took the whole rig across on the ferry for the drive into Leesburg.

Our last day was indeed a short one, as we planned on getting to the endpoint of the trail and then leaving the D.C. area ASAP to drive back to Ohiopyle. But there was still time for a few stops along the way. And it is always an interesting experience to take the towpath inside the Beltway, where you’re still down in a “ditch” and can see the top of the Washington Monument at one point along the way. Then suddenly you pop up off the trail and find yourself in busy downtown Georgetown!

With three riders having left from Leesburg and another going home by train, there was a lot of welcome room in the van for the long drive back. It was certainly quiet as most everyone was snoozing! At the time, with the mud, flats, and losing the Garmin, I was just glad it was done with and I wouldn’t ever have to repeat it. But of course I did come back four years later for what proved to be one of my most memorable tours.

I have a detailed trip report elsewhere in the blog for this same tour that I took in 2016, which remains my favorite off-road trip to date. In contrast, I didn’t have nearly as much Read more…

After doing my first tour on the Allegheny Passage – C&O Canal Towpath in 2012, I had the bug to do another fully-supported tour, but without making some of the mistakes of that first tour. Read more… 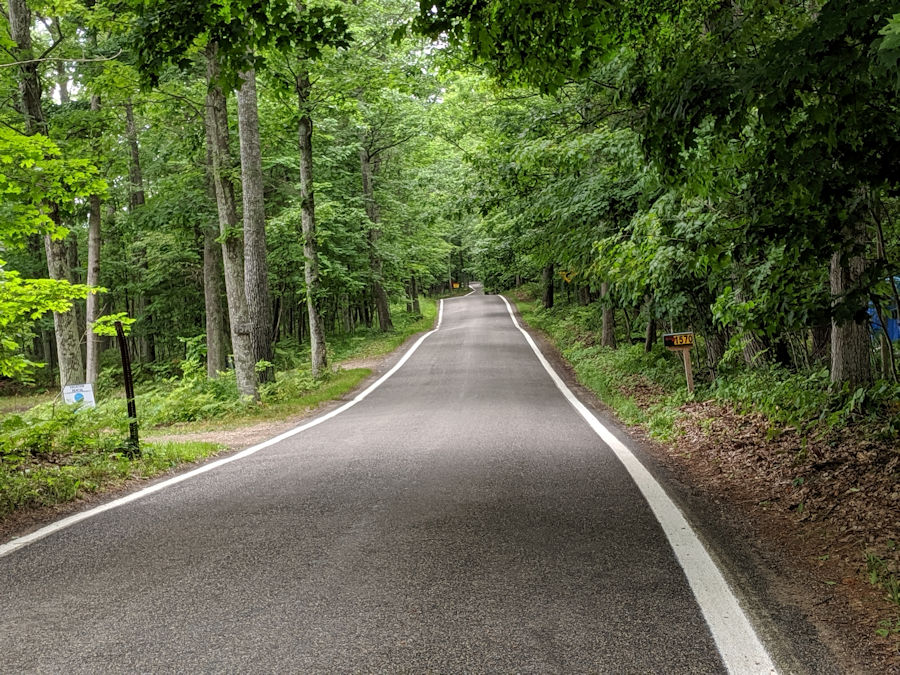 Day 5 – Thursday, August 8, 2019 – Tunnel of Trees This was one of the days I had been looking forward to the most since it involved riding on M-119: the famous Tunnel of Read more…