When I started doing my virtual biking in November 2020, and even when I wrote my original blog entry about FulGaz, I had no idea how much indoor biking I would be doing. The weather was finally good enough that I took my bike off the trainer in mid-May 2021 after a full 900 miles of virtual riding, but my setup at the end was not exactly what I started out with.

After a few months with the Kinetic trainer, it started having problems controlling the resistance. I went back and forth with the support technician at the company and they finally agreed to replace the entire control unit under warranty. But by that time I had decided that there were some basic drawbacks to using a wheel-on trainer and started looking seriously at direct drive trainers where the bike mounts directly to the trainer, which effective takes the place of the rear wheel. This makes them more accurate and also saves the trouble of having to pump up the tire and adjust the tension knob before every ride. The model that I settled on was the popular Wahoo KICKR Core mid-range trainer.

The trainer is sold without a cassette, but I happened to have a “spare” 11-32 cassette in my parts bin that I mounted onto the hub. Adapters are supplied with the trainer to accommodate quick-release skewers or thru-axles and I was able to easily mount my bike using its standard thru-axle.

Right from the start I really liked this unit much better than the Kinetic. It controlled the resistance smoothly and measured power accurately after doing the initial calibration procedure. The rides immediately became even more fun and my performance seemed to match my real-world results more closely. I also determined that the low-end Chromebook that I had been using a lot just wasn’t up to snuff performance-wise and I changed over to use our 12-inch Surface Pro tablet running Windows 10. That also made a difference in both the performance and visual appeal.

I ended up riding three or four times a week as my mileage continued to accumulate over the cold winter months. I tended to stick with the flatter rides simply because my cycling ability is well below the serious cyclists that use this platform, and most rides seem to be geared towards the competitive crowd. But with FulGaz adding a new group of rides every week, there was always something new and more rides suitable to my abilities than I possibly had time to try.

By the time I was ready to get my bike back on the (real) road, I had ridden over 900 miles on five continents and quite a list of countries, missing only riding in South America (and Antarctica!). Much of the scenery was interesting, although it did make me realize that a lot of the world looks pretty much the same from place to place, at least from the vantage point of a road bike. Some of the most memorable scenes were:

Another thing that FulGaz introduced during this time were organized paid group events that emulated a cycling grand tour. For example, they had one in England that covered several hundred miles of stages going from Land’s End in Cornwall to John O’Groats in Scotland, which is a classic British end-to-end journey. However, this was one of those events that was beyond my ability (not to mention too time-consuming) to attempt. I and some other of the slower riders are hoping that they introduce an easier event or two at some time in the future.

At the rate that FulGaz introduces new routes, there’s no telling what I’ll find there when I return to virtual riding in November, but I’ll certainly be ready by then to get back into it. It’s been a real blast!

Unlike many veteran cyclists, I’ve actually been interested in e-bikes since they first arrived on the scene, if mostly from the technical side and curiosity in trying one out. But I didn’t begin getting serious Read more… 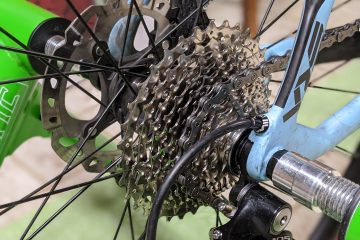 At the start of the year I didn’t have any particular plans for making modifications to either of my bikes, but as time went on I just couldn’t help but make some changes and additions. Read more…